Description of Life on the Hellish Planets 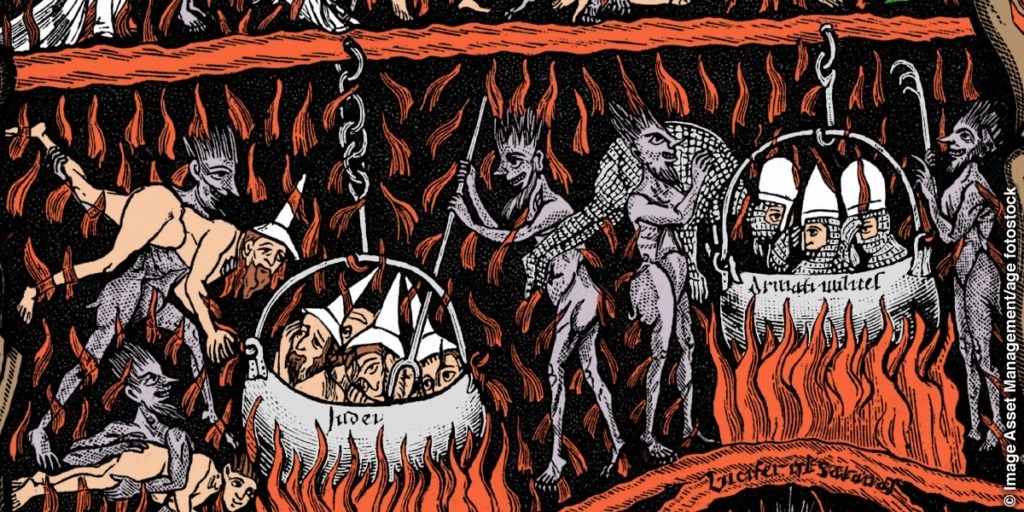 This describes the various hellish planets designed for people who engage in various sinful activities.

What Exactly is Hell?

The Vedic scriptures describe hell as planets where the sinners are taken after this life for their punishment.

The following are statements from the Srimad Bhagavatam canto 5, which was written more than 5000 years ago in Sanskrit.

In this life, an envious person commits violent acts against many living entities. After death, such a person is taken to hell by Yamarāja. And those living entities that were hurt by him appear as animals called rurus to inflict very severe pain upon him. This hell is called Raurava. Not generally seen in this world, the ruru is more envious than a snake.

Punishment in the hell called Mahāraurava is compulsory for a person who maintains his own body by hurting others. In this hell, ruru animals known as kravyāda torment him and eat his flesh.

For the maintenance of their bodies and the satisfaction of their tongues, cruel persons cook poor animals and birds alive. Such persons are condemned even by man-eaters. In their next lives they are carried by the Yamadūtas to the hell known as Kumbhīpāka, where they are cooked in boiling oil.

If a human being kills or torments insignificant creatures. The Supreme Lord punishes such a person by putting him into the hell known as Andhakūpa, where he is attacked by all the birds and beasts, reptiles, mosquitoes, lice, worms, flies, and any other creatures he tormented during his life. They attack him from all sides, robbing him of the pleasure of sleep. Unable to rest, he constantly wanders about in the darkness. Thus in Andhakūpa his suffering is just like that of a creature in the lower species.

Those who hunt and kill animals unnecessarily, he is placed after death into the hell known as Prāṇarodha. There the assistants of Yamarāja make him their targets and pierce him with arrows.

What Is The Punishment For Sex Outside of Marriage?

A man or woman who indulges in sexual intercourse with an unworthy member of the opposite sex is punished after death by the assistants of Yamarāja in the hell known as Taptasūrmi. There such men and women are beaten with whips. The man is forced to embrace a red-hot iron form of a woman, and the woman is forced to embrace a similar form of a man. Such is the punishment for illicit sex.

What is the Punishment For Thieves?

A person who appropriates another’s legitimate wife, children or money is arrested at the time of death by the fierce Yamadūtas, who bind him with the rope of time and forcibly throw him into the hellish planet known as Tamisra. On this very dark planet, the sinful person is chastised by the Yamadūtas, who beat and rebuke him. He is starved, and he is given no water to drink. Thus the wrathful assistants of Yamarāja cause him severe suffering, and sometimes he faints from their chastisement.

What Punishment Awaits The Misers and Those Who Are Not Charitable?

A person is considered no better than a crow if after receiving some food, he does not divide it among guests, old men and children, but simply eats it himself, or if he eats it without performing the five kinds of sacrifice. After death he is put into the most abominable hell, known as Kṛmibhojana. In that hell is a lake 100,000 yojanas [800,000 miles] wide and filled with worms. He becomes a worm in that lake and feeds on the other worms there, who also feed on him. Unless he atones for his actions before his death, such a sinful man remains in the hellish lake of Kṛmibhojana for as many years as there are yojanas in the width of the lake (thus 800,000 years).

What Punishment Awaits Those Who Lie?

A person who in this life bears false witness or lies while transacting business or giving charity is severely punished after death by the agents of Yamarāja. Such a sinful man is taken to the top of a mountain eight hundred miles high and thrown headfirst into the hell known as Avīcimat. This hell has no shelter and is made of strong stone resembling the waves of water. There is no water there, however, and thus it is called Avīcimat[waterless]. Although the sinful man is repeatedly thrown from the mountain and his body broken to tiny pieces, he still does not die but continuously suffers chastisement.

What Punishment Awaits Those Who Are Not Friendly or Compassionate?

A householder who receives guests or visitors with cruel glances, as if to burn them to ashes, is put into the hell called Paryāvartana, where he is gazed at by hard-eyed vultures, herons, crows and similar birds, which suddenly swoop down and pluck out his eyes with great force.